In the shed, the possums are watching. Mrs Possum is a grey Mountain Brushtail. That’s her third son next to her on the shed fridge. On the top shelf is her only daughter, with her first boy, and Mrs Possum’s latest boy on the left. Her two other boys and her boyfriend also visit. They all like a pat and a feed. 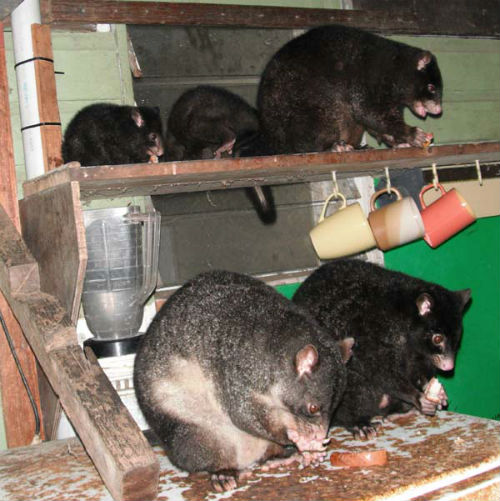 Ten years ago there was a young possum in a small tree in the front yard, looking lost. I passed her up some bread, took a picture, and left her to it. The shed joins the house in such a way that the house ceiling opens into the shed along the top of one wall, and one night she looked out at me from in the ceiling. I put some bread nearby, with a smear of honey on it. She liked that. Over days (nights) I moved the bread down to where I could pat her and we became friends.

Mrs Possum had babies and they grew up and had babies and now I have enough possum friends. My cat doesn’t care. She’s an old, lazy furball. However, I have not seen Mrs Poss for a years. She’s gone away for weeks in the past, but now I’m just pleased to have known her.

Last week a young possum walked in the front door of the house, through the lounge room, did a lazy lap of the kitchen and headed back out the front door. Checking the place out.

I’m tempted to let them into the house, because they’re so cute, but they have big, sharp claws and love to climb stuff. Might be best left outside.

When I hear possums screaching at each other in the bush at night, or running across the roof, I like that I know them. There are plenty of places where seeing a possum means reaching for a gun, but not in this country, and not at my place. They’re my mates. 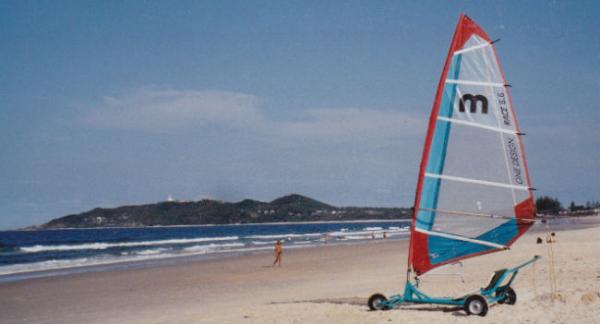 I stood on the beach in a stiff onshore wind, looking at miles of flat sand, and realised I needed a landsailer. Ten days later I was sailing the beach on this one, which I made myself, mostly from recycled steel and old windsurfer parts. 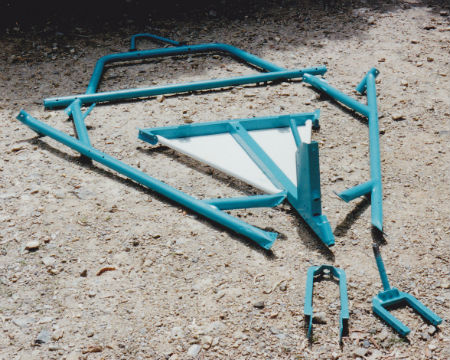 For some reason I thought it important to be able to pull the landsailer apart, so I made it in kit form. It’s old trampoline frame and a kiddie swing set, plus a few bits from the spare steel pile.

I made a sling seat from shade cloth so I could move from side to side for balance when going about. The result was a wide seat that looked very tempting to tourists, and I found that I had built a wind powered chick magnet. Beautiful women walking the beach would hitch a lift. I was happy to oblige.

The landsailer weighed about 60kg and did over 100kph. I loved it. For night sailing I put a small car battery behind the seat, with a red tail light on it, and a 100watt headlight on the front.

Eventually both ute and landsailer died of rust, after years of fun.

That’s my Border Collie, Buddy, sniffing the tailpipe. He’s now buried in the front yard, after a long, happy life.

By the time the landsailer and ute rusted, I was hooked, so I bought a Blokart and put it in the back of my Subaru wagon. The fun continues.

I can’t weld stainless steel, so I bought a beautifully made landsailer from New Zealand. In fact, I bought two Blokarts, and became the local distributor, selling none and getting dumped. People would see me on the beach and get excited about owning one, then contact the manufacturer directly. I showed Blokarts to a kite-surfing shop and was told they were too expensive, but the next time I went past, he had one out the front for sale. It’s not like I care. I had sailing to do. 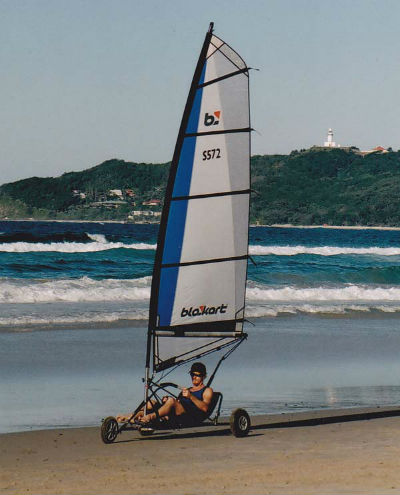 For a while I had a speedo on mine, and did over a thousand kilometres on the beach. It’ll do about 100kph flat out in a big wind with the three square metre sail. I usually use the four metre sail, and fly a wheel a lot. It’s not that I’m lucky to have a beach to sail on. I looked at the beach and needed a landsailer, so I made one, then when that one rusted away I bought a nice, shiny one. I sail in a National Park, as the Marine Park extends to the high tide mark, and I’m welcome. There are places where local council gets a say on what goes on, but I’m never short of somewhere to sail.