Welcome to nugley, a window on my world.

I spent time in a wheelchair after a car crash in 2009, so to amuse myself and keep busy I started this site. I called it ‘putting my shit out there’ and here it is, getting an update whenever I could be bothered. Only people I know read this anyway so WTF, here it is. (Latest update Oct 2015, when I added bush chair in nugleyart).

I got better after the crash and took up paragliding. (see Car Crash). Floating around in the sky is easy, and, although Australians flog this word to death, I have to say it’s ‘awesome’. Take-off and landing you just have to get right or suffer the consequences. I’m getting better at it with practice, and fortunately have friends who take off, fly and land with grace and beauty to emulate.

Flying makes sense of life, but is too weather-dependent to be really satisfying. So, when I got my paragliding license I bought a back-pack fan (Snap 120) and that’s my ‘funnest thing ever’ to do. Strap on a back-pack with a 100cc two-stroke and a 1.2m fan, run and fly. Gas and go.  Better than sex, because now you can see me do it on Youtube. (search nugley).Now I have an aircraft in the back of my Subaru wagon, and a license to fly. And then, just for the fun of it, I got my ‘tow launch’ endorsement at Evans Head, being dragged into the sky like a giant kite with a kilometre of cable. See that on nugley youtube too.

I had a party a while ago to celebrate living here 20 years, and to christen the deck I built, with friends and neighbours. It was a good night. One of the gifts I was given was a door mat saying (with the usual crossed circle) DICKHEAD FREE ZONE. I like that. I especially like that it was a gift from friends who like my attitude. I designed and had printed (some years ago) Tshirts saying ‘Meanwhile…Back in the Real World…’ with the M an Om symbol on its side. Sometimes in conversations I would have to point to the Tshirt, to get a reality check. I sometimes give these Tshirts away, to people who have earned them by getting stuff done despite well-intentioned but deluded opposition. I once had a conversation outside a Crown Hotel in Sydney that inspired me to take off the ‘Meanwhile’ Tshirt I was wearing and give it to a woman working in Conflict Resolution in the Family Law Court. Hi Michelle. I also gave one to George the Snakeman of Byron Bay, who has plucked from Byron Bay so many Eastern Brown snakes (second most venomous in the world) that if laid nose to tail they would exceed the length of the main street. (see byronsnakepatrol.com)

I live in a nice old house, but when I leaned on the railing of the front veranda it fell off, so I fixed that. When digging the foundations for the new posts I found clay sticking to my boots. I seived some and turned pots on the wheel. Now I can sit on the new veranda and eat from bowls I made from the clay beneath me. (see nugley art).

I live up a valley, not far from the coast, in a little house with a shed about the same size, and cows. The herd gets moved from paddock to paddock, doing the rounds, keeping the grass down, so, to make it easier to get around, the main gates are remote controlled. Press a button on a keyring and the gate swings open, then press another to close. Great time saver, and so much safer, especially on a bike or horse. I’ll never again have to get in front of a herd of cows just to open the gate for them, and then have to get behind them to push them through. The gate openers have saved me more time than it took to make them. They use a car windscreen wiper motor with a bike cog on it, running chain back and forth, pulling a cable attached to the lock on the gate. There’s a 12 volt battery and a solar panel. Rugged and reliable. They were fun to design and build, but don’t ask, because I’m not making any more and couldn’t be bothered drawing plans. But I did put a video on youtube.

The remote-control gates are great in foul weather, but even more so if a car crash puts you in a wheelchair for a while. When I started driving again after busting ankles, knees and wrists (etc) in a big head-on, I’d have my crutches in the car and I saved myself a lot of time and unnecessary pain. 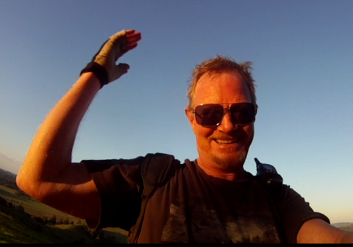 The Nissan Skyline Silhouette was beautiful until I borrowed it from a mate. (hey, take the Skyline, I just fixed the air-con!) and drove it into a Commodore. Read about it on the car crash page, with pics. Short story: tourist forgot what side of the road we drive on, and I got good advice and followed it.

So I took some years off, and life’s picked up pace again. Nugley was on my list of things to do, so I’m doing it, even if not particularly well. There’s a nugley art page with my art, old and new. Nugley shed is where I will post pics of interesting stuff like the gate opener, pvc flutes, heat engines, buggies and machines we make and fix. I’ll add some links to the most interesting people I know, and perhaps post some creative writing. If I feel like it.